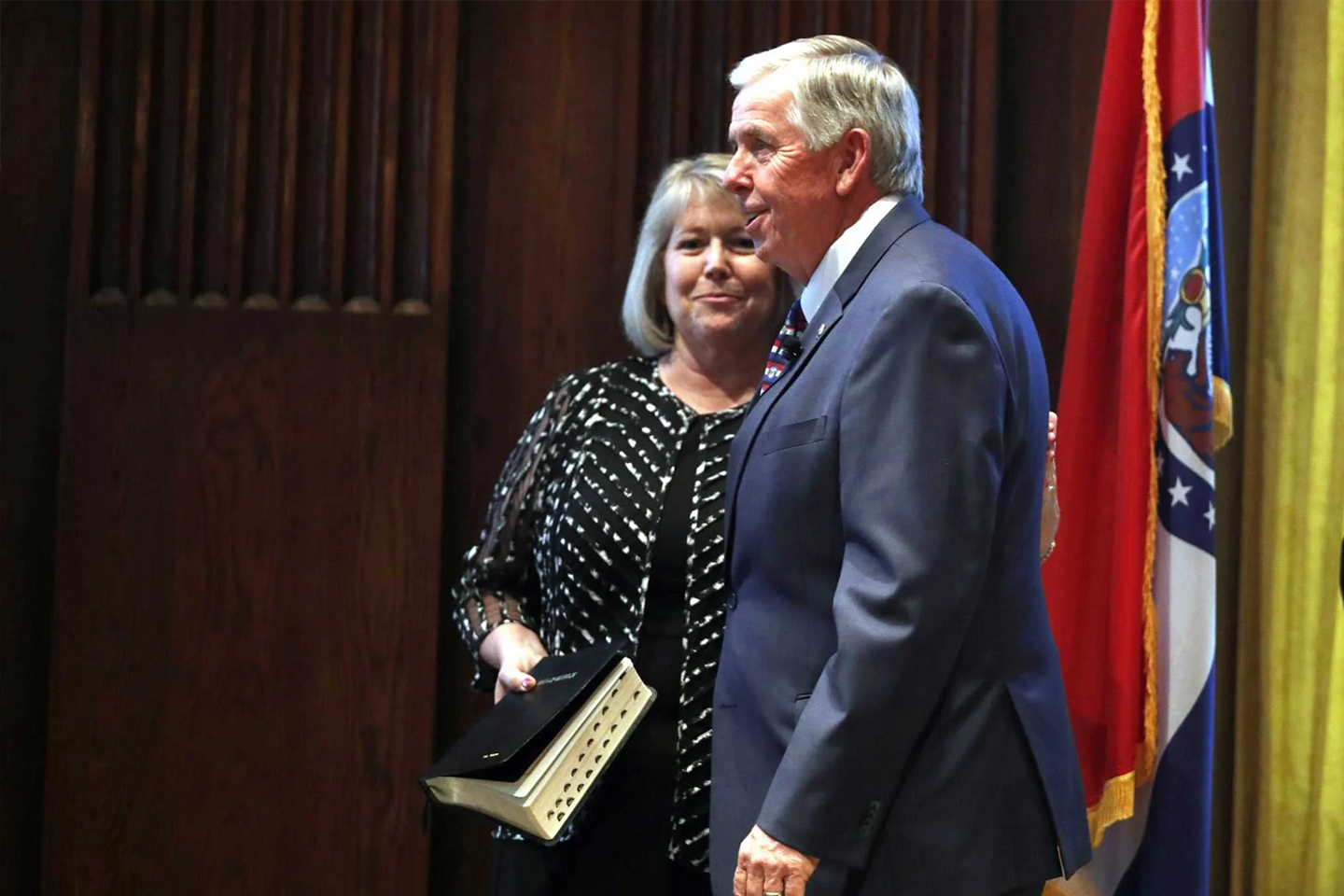 Missouri Gov. Mike Parson, a Republican who has steadfastly refused to require residents to wear masks, tested positive for the coronavirus, his office said Wednesday.

Parson was tested after his wife, Teresa, tested positive earlier in the day. Teresa Parson had experienced mild symptoms, including a cough and nasal congestion, spokeswoman Kelli Jones said. She took a rapid test that came back positive and a nasal swab test later confirmed the finding. The governor’s rapid test showed he tested positive and he is still awaiting results from the swab test.

“I want everybody to know that myself and the first lady are both fine,” Parson said in a video posted on his Facebook page.

“Right now I feel fine. No symptoms of any kind,” Parson said in the video. “But right now we just have to take the quarantine procedures in place.”

Gov. Parson postponed several events through the remainder of the week. He and his wife had been traveling around the state this week for events that included a ceremonial bill signing in Cape Girardeau, where a photo posted Tuesday on the governor’s Facebook page showed both of them wearing masks.

On Friday, he and several other Missouri Republican candidates appeared together at an event called the “TARGET BBQ” in Springfield. A photo posted on Parson’s Twitter pages shows Parson on a stage with four other statewide officeholders seeking reelection: Treasurer Scott Fitzpatrick, Lt. Gov. Mike Kehoe, Secretary of State Jay Ashcroft and Attorney General Eric Schmitt. They appear to be a few feet apart from each other, but none are wearing masks.

Missouri Department of Health and Senior Services Director Randall Williams said contact tracing efforts have begun, seeking out people who have had close contact with the governor or his wife, but despite Parson’s many recent public appearances, it is believed that involves “a relatively small number of people.”

“Surprisingly it’s not as big a number as you might think because while they might be in a room with 1,000 people, the number of people who were literally with them for 15 minutes, right up next to them, is actually a smaller number,” Williams said at a news conference.

Parson is self-isolating in the governor’s mansion, Williams said. His wife is isolating at their home in Bolivar in southwestern Missouri.

Spokespeople for Schmitt, Fitzpatrick and Kehoe said those elected officials all tested negative Wednesday. A spokeswoman for Ashcroft said his “recent interactions with the Governor and First Lady fall well short of the ‘close contact’ threshold.”

Parson, 65, is facing Democratic State Auditor Nicole Galloway in the November election. The two were supposed to debate Friday in a forum hosted by the Missouri Press Association, but it has been postponed, said Mark Maassen, executive director of the association. He said the forum will be rescheduled.

“I wish Governor Parson and First Lady Teresa Parson a safe and full recovery,” Galloway said in a statement. “This is a stark reminder that this virus can reach anyone, anywhere and that this pandemic is far from over. We must all continue to do our part in preventing the spread of the virus by practicing social distancing, washing hands, and wearing a mask.”

Parson has repeatedly urged residents to wear masks and maintain social distancing, but he has been an outspoken opponent of mask mandates, sometimes appearing at functions without one. In July, speaking without a mask at a Missouri Cattlemen’s Association steak fry in Sedalia, he reiterated his stance.

Parson’s opposition to statewide mask mandates has held strong even as the White House Coronavirus Task Force has recommended a face covering requirement in Missouri given the state’s escalating number of confirmed cases. When Parson allowed the state to reopen for business in mid-June, about 16,000 cases had been confirmed. The state health department on Wednesday added 1,580 new cases, bringing the total to 116,946 since the pandemic began.

The state also has reported 1,947 deaths, including 83 reported Wednesday. That single-day total was the highest since the pandemic began. The second-highest was the 57 announced Tuesday.

Asked Wednesday whether it was time for a statewide mask mandate, Parson’s health director again deferred those decisions to local officials.

“We just think that if you’re too draconian everywhere … it’s almost as if it creates more problems than it solves,” Williams said.

Parson would be considered a potential high-risk patient given his age and a preexisting condition. On Christmas Eve in 2016, Parson underwent heart surgery after doctors discovered a blockage during a routine checkup in Springfield.

Two other Republican governors also have tested positive for COVID-19, though one of those turned out to be a false positive. Oklahoma Gov. Kevin Stitt in July became the first governor to announce he’d tested positive. He recovered and returned to work less than two weeks later.

In August, Ohio Gov. Mike DeWine announced that a rapid test was positive. But a short time later, DeWine said a more sensitive test was negative.

Parson is a former county sheriff and state representative who was elected lieutenant governor in 2016.

A spokeswoman for Big Ceder Lodge, which operates the new Payne’s Valley course, said the governor and first lady were there for “a limited amount of time and did not have direct interaction with the participants.”