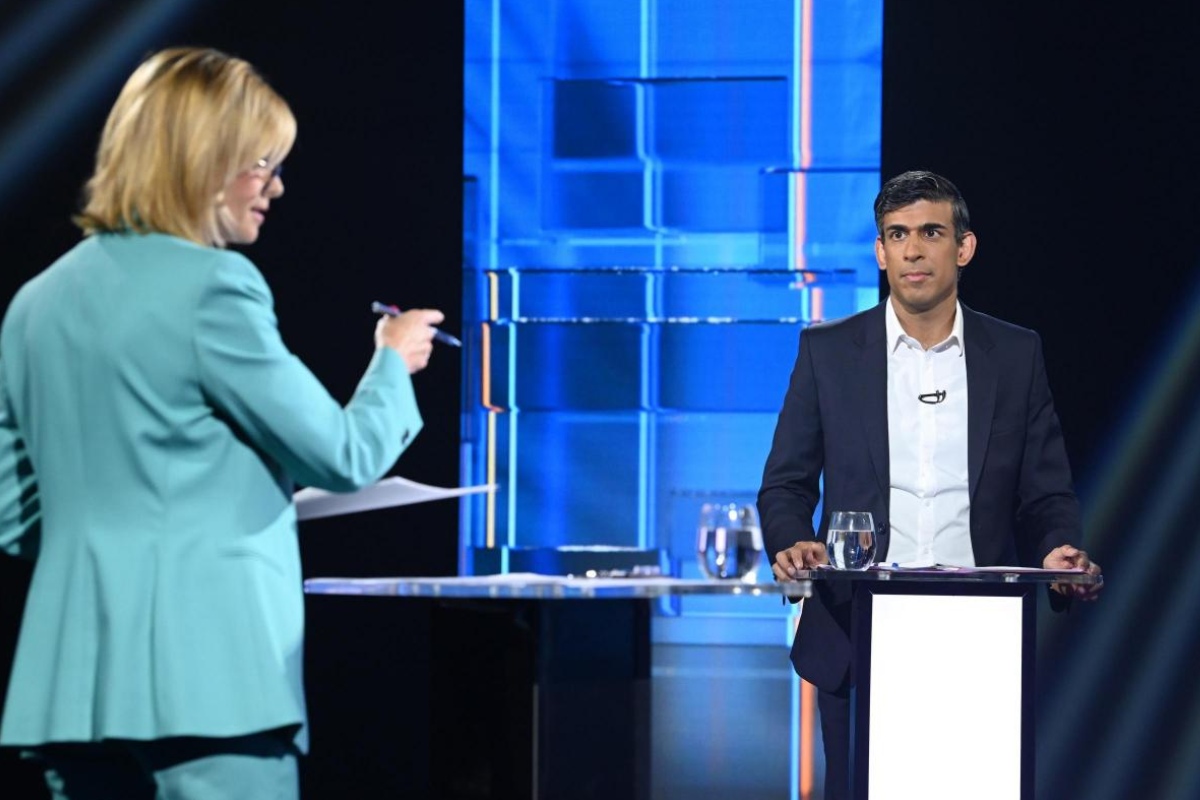 Rishi Sunak accused his rival Conservative leadership candidates of promoting “socialism” by promising unfunded tax cuts, as the deep divisions in the party over economic policy were exposed in a bad-tempered televised debate.

As the contenders clashed repeatedly over tax and spending in the ITV debate, Liz Truss confronted her former cabinet colleague, saying: “Rishi, you have raised taxes to the highest level in 70 years. That is not going to drive economic growth.

“The fact is that raising taxes at this moment will choke off economic growth,” she added.

Truss has promised tax cuts worth as much as £30bn, suggesting they can be paid for through additional borrowing and faster growth.

Sunak insisted there would be a cost to immediate tax cuts, however, in “higher inflation, higher mortgage rates, eroded savings”.

“And you know what, this something-for-nothing economics is not conservative, it’s socialism,” he said. “If we’re not for sound money, what is the point of the Conservative party?”

The hard-fought leadership contest, triggered by the reluctant resignation of Boris Johnson as Tory leader 10 days ago, has pitted current and former cabinet colleagues against one other.

Truss, who has the backing of Johnson loyalists including Jacob Rees-Mogg and Nadine Dorries, has defined herself in particular against Sunak, who led in both the first two rounds of voting among MPs.

He has staunchly defended his record as chancellor, however – including the decision to raise national insurance contributions.

As well as questioning colleagues’ tax cut plans, Sunak also took on Penny Mordaunt’s suggestion earlier on Sunday that she could ditch one of his fiscal rules – the promise only to borrow for investment, not day-to-day spending – to allow the Treasury to spend more on tackling the cost of living.

Challenged about it, Mordaunt said: “Too many chancellors have had too many fiscal rules that they have then had to ditch because they weren’t able to meet them,” prompting Sunak to shoot back: “Literally Jeremy Corbyn didn’t think that was the right approach.”

Taxes and the economy have been at the heart of the contest, with Sunak the only candidate not promising immediate tax cuts, promising instead not to tell “fairy tales” about what is affordable.

With each candidate given the opportunity to question one of their colleagues, three of Sunak’s four rivals turned on him.

Kemi Badenoch asked him why he had failed to take more action on Covid loan fraud, despite the fact that she and other ministers had raised the issue with him during the pandemic.

He said: “That’s absolutely not right”, stressing the speed with which the scheme had had to be rolled out. Truss asked Sunak about whether he still favoured investment in China, and Mordaunt questioned whether he had done enough as chancellor to fund defence spending.

Sunak turned on Truss, asking her: “You’ve been both a Liberal Democrat and a remainer: I’m just wondering which one of those you regretted most?” The foreign secretary said she wasn’t born in a Conservative home, and had been on a political “journey”.

She also returned to the familiar theme of her Leeds comprehensive school, where she claims fellow pupils were let down by low expectations, contributing to her move to the right.

Shortly before the debate, Sunak’s team had released a quirky black-and-white Pathé News-style video drawing attention to the fact that he backed Brexit in 2016, unlike Truss.

Conor McGinn, Labour’s deputy national campaign coordinator, said the style of it “feels about right for the guy who as chancellor has brought us the highest taxes and biggest drop in living standards in 70 years … Rishi Sunak’s taken us back to the 1950s”.

One of the few striking moments of consensus in the debate, in which the candidates repeatedly confronted each other, was when presenter Julie Etchingham asked them to raise their hands if they would welcome Boris Johnson into their cabinet.

None of them did so – though Mordaunt said “he got Brexit done”. All five also said they would not call a general election to give them a mandate if they won the leadership contest this autumn.

Tom Tugendhat attacked his rivals for remaining in the government propping up Johnson, saying: “Even really good people lent credibility to the chaos.”

Dominic Raab, the deputy prime minister, who supports Sunak, earlier suggested Truss’s record in government belied her claim to be a tax-cutter. “Liz can answer for her policies and her record; she was chief secretary of the Treasury. People can see whether spending and headcount in the civil service went up or down,” he told Sophy Ridge on Sky News. “Did she cut taxes at that time?”

The debate was the second of three televised clashes between the candidates. Half of the original field of 10 contenders, including Sajid Javid and Jeremy Hunt, have already been knocked out, after two rounds of voting.

Further votes among MPs will be held on Monday, Tuesday and if necessary Wednesday, with the final two candidates then presented to Conservative members, who will make the final decision by 5 September.

A new online survey of party members, published on Sunday by website Conservative Home, suggested Mordaunt’s popularity may have peaked. It showed Truss beating Sunak by 49% to 42% and Mordaunt by 48% to 41% in head-to-head comparisons.

Mordaunt had earlier criticised what she called the “toxic politics” of the race, and “smears” against her.

Documents leaked to the Sunday Times suggested Mordaunt was prepared to remove some, though not all, of the medical requirements for individuals opting to change their gender.

Badenoch, her successor as equalities minister, who is also running for the leadership, has said Mordaunt’s stance in the past was to push for self-identification. That contradicts Mordaunt’s insistence in Friday’s Channel 4 debate that she was “never in favour of self-ID”.

Badenoch told the Sunday Times: “I’m not going to call her a liar, I think it’s very possible she genuinely did not understand what she was signing off. It’s a very complex area.”