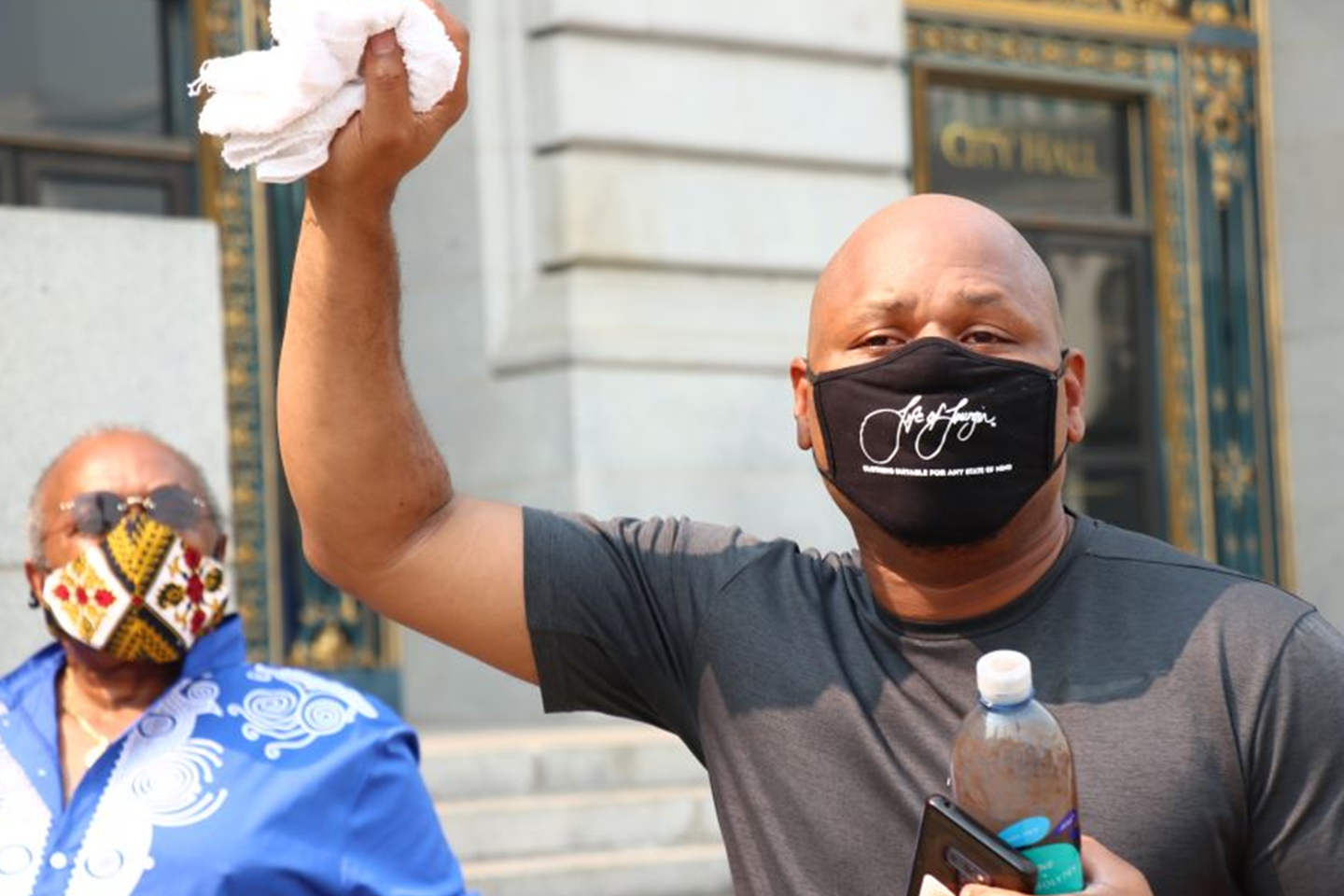 “I worked directly in DHR for four years,” said Dante King, the main speaker at the event, who is now with the MTA. “I will say this: During my time there I got to see people do things that undermined fairness, that undermined equality.”

The Black Employee Alliance and Coalition Against Anti-Blackness hosted roughly 50 participants at the rally at City Hall calling for accountability for city officials. The latter, they allege, are complicit in the suppression of discrimination complaints by Black city workers.

Mission Local recently spoke with San Francisco departmental HR officials who said that discrimination complaints by employees were purposefully edited by the department to downplay the gravity of the accusations, then often disregarded entirely.

King said that Callahan and Simon were either involved in the EEO manager Rachel Sherman’s alleged forgery scheme or were incompetent in not knowing it was happening.

Two days ago, a lawyer for Simon issued cease and desist letters to members of the Black Employee Alliance and the Coalition Against Anti-Blackness.  The groups defiantly disseminated the letters to their members and city officials.

“Ms. Simon had no knowledge of Sherman’s actions. She did not condone Sherman’s actions or attempt to cover them up. For you to claim otherwise, and to assert, for example, that Ms. Simon was involved in ‘criminal activity,’ is defamatory,” the letter from Simon’s lawyer said.

Organizers replied to Simon saying, “The Black Employee Alliance and Coalition Against Anti-Blackness will not relent from our quest for change, accountability, and transparency.  We will also not be intimidated by San Francisco City Officials or leaders who decide we are too vocal and/or ‘problematic.’  As Black people, we have been (and continue to be) forced to be silent about our oppression and our oppressors.  This is a blatant example and act of that oppression.”

King, who frequently joked at the event that he might be fired for speaking out, has a history of calling attention to racism within the city government.

King, who was then on the tail end of two years as an implicit bias trainer for the department, recalled an incident in which a group of SFPD captains and lieutenants took him to lunch, where they told him officers would respond better to the training if King were white.

Although the name of that officer was redacted when city officials released the document to the San Francisco Examiner, the paper later confirmed that officer to be Captain Jason Cherniss.

Organizers invited multiple city officials to speak at today’s event, including Mayor London Breed and more than half of city supervisors, whom they see as having, “demonstrated consistent support for the challenges faced by Black employees and residents of San Francisco,” according to an email announcing the rally.